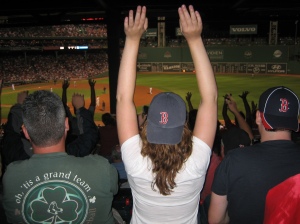 August 30, 2011:  The crowd grows restless — especially during 4+ hour games vs. the Yankees.  It begins with a stir.  The noise gets louder.  And louder still.  Finally, the movement begins.  The crowd roars.  Arms are raised.  It’s coming — The Wave.  And every single time it happens I remember that scene in When Harry Met Sally.