‘Twas the Night Before Christmas in Red Sox Nation 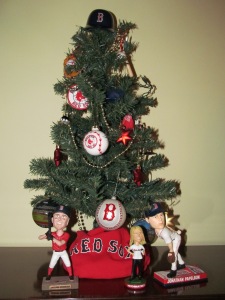 ‘Twas the night before Christmas when all through Fenway Park,

Not a creature was stirring; the stadium lights were dark.

The pennants were hung from the roof deck with care;

With hope that another would hang there next year.

The fans were all nestled in seats turned to beds,

While visions of opening day filled up their heads.

And I in my PJ’s and matching Sox cap;

Had just settled down from the September collapse.

When out in left field there arose such a clatter;

I sprang from my seat to see what was the matter.

Away from the grandstand I flew in a flash;

I hoped Tito had returned and was making a dash!

The Citgo sign lit up the new fallen snow;

And gave the luster of a day-game to the field below.

When what to my wondering eyes should appear,

But a golf cart full of chicken and beer!

With a little old driver, so lively to see;

More rapid than their fastballs the pitchers, they ran;

But he whistled and shouted and called out each man,

“On Beckett! On Lester! On Buchholz and Bard!”

“Keep it out of the bleachers! Keep it away from The Wall!”

“Now put down that beer and dash away all!”

As pitched balls left up, into the stands will fly;

When met with a bat can mount to the sky.

Down to the clubhouse, the pitchers, they flew;

With a cooler of beer and Bobby V. behind them, too.

And then with a crash, I heard from the club,

The sound of a scuffle coming from their private pub.

As I shook my head and was turning around,

Out from the dugout, Bobby V. came with a bound.

He was dressed all in black, from his head to his foot;

And I knew for his clothing he paid a bundle of loot.

The cooler of beer, he balanced on his head;

And he said, “If you touch this beer, boys, you’re dead!”

His eyes — How they twinkled! His smile — How wide!

Yet they knew that from Bobby there was no place to hide!

His droll little grin was as sly as a cat;

And in his hands, he held a great big, scary bat.

The scruff of Beckett’s neck, he held in his teeth;

The rest peeked out from their caps, underneath.

He had a pleasant face and no sign of a belly,

But he made the players knees feel like bowls of jelly.

He was focused and determined, a right jolly old elf;

And I liked him when I saw him in spite of myself.

A wink of his eye and a twist of his head,

Soon let me know I had nothing to dread.

He spoke many words, but got right to his work;

He emptied the cooler, then turned with a jerk.

He buried the fried chicken and replaced it with sushi;

Then he sprang to his cart, to his team gave a whistle;

And away they all flew leaving a trail of chicken gristle.

But I heard him exclaim, ere he drove out of sight,

“Sleep well, Red Sox Nation, all will soon be alright!”