Having My Say: A Dear John Letter (John Henry, that is) 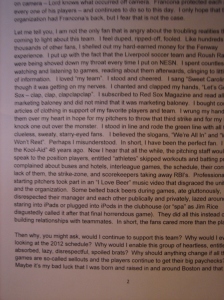 I am still not over it.  That is why I sat down and wrote this letter to John Henry, Larry Lucchino and Tom Werner.  When I dropped it in the mailbox, I hoped that it would bring some closure.  In a way it has.  For the rest of you that are as disappointed and disgusted as I am with the Red Sox, I am sharing my letter.  Some of the letter was gleaned from my post entitled “How the Red Sox Broke My Heart:  2011 Edition”.  Okay, I cleaned it up a little and tried not to refer to the most unlikable of players by name.  I was trying to be polite because the ownership has made an effort to speak publicly about the Greatest Collapse Ever.  Here is the text of the letter.  Let me know what you think.

First, I want you to know that I have never before been compelled to write a letter like this to people in your positions.  Secondly, I want you to know that I have been a Red Sox fan since I was 9 years old.  That makes 46 years of loving my home town team.  In all of those years, through ups and downs (mostly downs), I have never been as angry, disgusted and disappointed with “my team”.  I realize that I only know what has been reported and a lot of it is pure speculation; but I know that where there is smoke there is fire.  I also know what I saw with my own eyes through the 2011 season and what I knew in my heart but did not want to admit.  What I saw was a team that lacked heart, a team that did not gel, and a team that, frankly, did not appear to give a damn. What a marketing nightmare. The Red Sox have become downright unlikable.  They have become the Yankees minus the will to win.

In 2011, I visited Fenway Park at least 25 times.  Each time I visited, I was as excited and happy as I was my first time in 1967 when my father took me for my birthday.  This past spring, I went to Ft. Myers for the first time on a Red Sox Destinations trip.  It was a dream come true.  I also have been a card-carrying member of Red Sox Nation for several years.  In 2012, I will not be visiting spring training nor will I re-join Red Sox Nation.

Please understand that it is not about winning or losing.  In fact, I loved the 2010 Red Sox and we all know how that ended.  Despite all of those devastating injuries, they showed such heart and soul.  Each player on the field appeared to do their best every single day.  I walked away from the 2010 season feeling like there was hope for a fabulous 2011.  I supported a team and organization that had character and integrity.  I was very proud of my Sox and looked forward to 2011.  But what I saw this year changed all that.  This was a different team beginning in April. Even when things looked better by mid-summer, something was clearly wrong.

I cannot pretend to know whether it was Terry Francona’s fault or not.  I can only suspect that he lost control of certain players for reasons we will probably never know.  Only you know whether he needed to go.  I can only tell you that from a fan’s perspective, Francona appears to be a good and decent man whose organization and players let him down. The public disrespect from Ortiz and Lackey (please make the latter go away) must have only been the tip of the iceberg.  Those incidents happened on camera – Lord knows what occurred off camera.  Francona protected each and every one of his players – and continues to do so to this day.  I only hope that the organization had Francona’s back, but I fear that is not the case.

Let me tell you, I am not the only fan that is angry about the troubling realities that are coming to light about this team.  I feel duped, ripped-off, fooled.  Like hundreds of thousands of other fans, I shelled out my hard-earned money for the Fenway experience.  I put up with the fact that the Liverpool soccer team and Roush Racing were being shoved down my throat every time I put on NESN.  I spent countless hours watching and listening to games, reading about them afterwards, clinging to little tidbits of information.   I loved “my team”.  I stood and cheered.   I sang “Sweet Caroline” even though it was getting on my nerves.  I chanted and clapped my hands, “Let’s Go Red Sox – clap, clap, clapclapclap”.  I subscribed to Red Sox Magazine and read all the marketing baloney and did not mind that it was marketing baloney.  I bought countless articles of clothing in support of my favorite players and team.  I wrung my hands or held them over my heart in hope for my pitchers to throw that third strike and for my hitters to knock one out over the monster.  I stood in line and rode the green line with all the other clueless, sweaty, starry-eyed fans.   I believed the slogans, “We’re All In” and “We Won’t Rest”.  Perhaps I misunderstood.  In short, I have been the perfect fan.  I “drank the Kool-Aid” 46 years ago.  Now I hear that all the while, the pitching staff wouldn’t speak to the position players, entitled “athletes” skipped workouts and batting practice, complained about buses and hotels, interleague games, the schedule, their contracts or lack of them, the strike-zone, and scorekeepers taking away RBI’s.  Professional starting pitchers took part in an “I Love Beer” music video that disgraced the uniform and the organization.  Some belted back beers during games, ate gluttonously, disrespected their manager and each other publicly and privately, lazed around staring into iPads or plugged into iPods in the clubhouse (or “spa” as Jim Rice disgustedly called it after that final horrendous game).  They did all this instead of building relationships with teammates.  In short, the fans cared more than the players.

Then why, you might ask, would I continue to support this team?  Why would I even be looking at the 2012 schedule?  Why would I enable this group of heartless, entitled, self-absorbed, lazy, disrespectful, spoiled brats?  Why should anything change if all the games are so-called sellouts and the players continue to get their big paychecks?  Maybe it’s my bad luck that I was born and raised in and around Boston and that I grew up a Red Sox fan.  Maybe the answer is that I cannot help caring about seemingly good young men like Pedroia, Ellsbury, Papelbon, Saltalamacchia, Bard, Aceves, Lowrie, Scutaro, Aviles, and a few others, despite their flaws, their costly errors, and their occasional mental mistakes on the field.  Now I understand what and who they were dealing with and the fact that they were trying to carry this dysfunctional team on their backs.

I thank you for your attention and hope you understand that I will never stop caring about the Red Sox, but it will never be quite the same again.