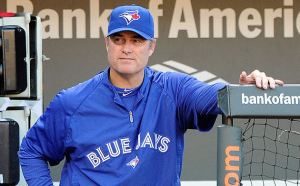 He’s baaaaaack!  It happened and I am glad.  I think.  John Wayne … I mean … John Farrell is about to ride in on a white horse and save the Red Sox.  You know what that means, don’t you?  Dust off the NESN Farrell-cam for countless shots of that strong-chinned, handsome face intimidating everyone with his stare from the dugout.  I was hoping for this … I think.  Maybe it is because Farrell is so familiar to me and I yearn for the Terry Francona days.  All we really know about Farrell is that he kept the Red Sox pitching staff under control when he was their pitching coach.  As a manager, all we really know is that he led the Blue Jays to next-to-the-last place over only the Red Sox.  Meh.  There were also reports out of Toronto about Farrell that were troublesome.  Will he be a different manager in Boston?  We know he understands the hierarchy of the Red Sox organization and that Ben Cherington has a good relationship with him.  That’s a positive.  We know (at least we think) that the players respect and perhaps fear him.  That’s a positive.  Is it enough?

Then there is Mike Aviles who was traded to the Blue Jays in the deal.

If you are looking for statistics and intelligent baseball knowledge commenting on this deal, try another blog.  This blog is written from the heart of a Red Sox fan.  My heart tells me that Mike Aviles was too high a price to pay for a manager — even a manager riding a white horse.  What I know about Mike Aviles is this:  He is an above-average shortstop who worked hard to prove himself.  He did extra work every day with Dustin Pedroia on infield practice.  He was a mentor and friend to rookie, Will Middlebrooks, and took him under his wing in the major league clubhouse.  (If you follow their Twitter accounts, you can see the friendship between them.)  He did everything with a smile.  He clearly enjoys the game of baseball and knows how lucky he is that he gets to do it for a living.  Everyone made fun of Larry Lucchino’s letter to fans where he referred to “friendly Mike Aviles” but it is true.  I had three Mike Aviles moments this past year.  The first was at the Bosox Club luncheon.  Mike was fan-friendly and said all the right things.  The second encounter was when I was on the field with my nephew for his “Play Ball!” experience.  While walking past the dugout, I peered in — couldn’t help myself.  The only face looking back at me was Mike Aviles.  While all his teammates hid behind their caps, heads bowed (their usual response around fans who don’t pay for their presence), Mike looked up, smiled, waved and said “Hi!”  The third encounter was at the pre-game celebration for Tim Wakefield’s retirement.  While holding my Wakefield quilted fabric portrait, who was looking up admiring the quilt from the dugout but Mike.  He told the players on either side of him (Kelly Shoppach and Marlon Byrd) to look up.  He then gave me the thumbs up with a “Nice!” thrown in.  These are little things, I know, but as I always say, it takes so little to make a fan for life.

So, Mike Aviles, you leave for Toronto but you have made a fan for life.  I hope you get a good manager and good teammates and that you show them what you can do.  I will look forward to seeing you at Fenway next year where I will wear my Aviles t-shirt and cheer for you to do well (as long as your teammates do not).

And thanks for this signature.  You will be on my Red Sox quilt forever as well as in my heart. 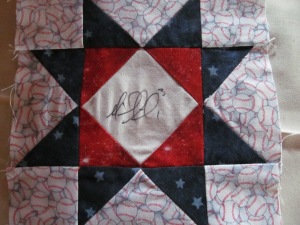 1 Response to Trading Friendly for Farrell