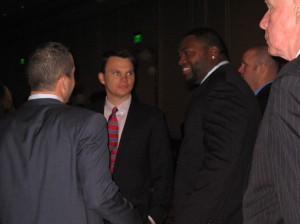 I trusted you. ; I had faith that you could right the ship. ; After you pulled off The Trade of 2012, dumping the contracts that had the Red Sox in a multi-year stranglehold, I looked at you in a different light. ; I was willing to forgive you for trading away Josh Reddick (who went on to blossom in Oakland) and Marco Scutaro (who became the Giants’ World Series MVP). ; I still had faith in you. After all, you brought back John Farrell. ; After a tumultuous 2012, all was suddenly calm on Yawkey Way. ; I felt good about the rebuilding of my Boston Red Sox. ; I can handle a “bridge year” or two…or three.

So, Josh Hamilton is not coming through that door. ; Enter Jonny Gomes. ; Enter David Ross, Shane Victorino, Stephen Drew and (maybe) Mike Napoli. ; Enter Ryan Dempster, he of brilliant Harry Caray impersonations. ; They are all reportedly “good clubhouse guys”. ; In your effort to remake the so-called “unlikeable” Red Sox, you have assembled quite a cast of characters. ; That would be fine if you were auditioning a new cast for Saturday Night Live, but this is a baseball team, right? ; A baseball team now filled with .225 hitters. ; Nice guys who are on the down-side of their careers. ; Add them to the mix of the always yapping dirt dog, Dustin Pedroia, the veteran top dog, David Ortiz, and the illusive Jacoby Ellsbury; and who is the alpha wolf in the clubhouse? ; Can a team have too much personality? ; Just because Mike Napoli destroyed Red Sox pitching at Fenway doesn’t mean he can play first base. ; If you wanted a first baseman with a bad hip, you could have brought back Kevin Youkilis. ; At least he’s a good first baseman. ; But Napoli is a “good guy”, right? ; Fans will like him. ; After several balls thrown to him bounce off the dirt and into the Red Sox dugout, will the fans still like him? ; Will we think of the months with James Loney on first as the good old days?

The pitching rotation currently stands at Lester, Buchholz, Dempster, Doubront and Lackey. ; Do those names inspire trust? ; Dr. Phil has said, “The best indication of future behavior is past behavior.” ; I hope the good doctor is wrong about that.

Ryan Dempster, by the way, is a very funny guy who looked good against the Red Sox a couple of times last year. ; But remember it was the 2012 Red Sox. ; You understand what I’m saying, don’t you, Ben? ; (How long before Dempster works a Joe Castiglione impersonation into his repertoire?)

Chemistry is a good thing, Ben; but you cannot recreate the 2004 self-proclaimed “idiots” no matter how hard you try. ; You can bring them back in Duck Boats for a bizarre 8th anniversary celebration, but they are not taking the field, Ben. ; Kevin Millar is not walking through that door without an MLB TV microphone in his hand.

By the way, if you were looking to overpay a bunch of mediocre outfielders with great personalities, why have you passed on Cody Ross? ; Cody is better than mediocre. ; He wanted to stay. ; He loved Boston. ; He has a perfect Fenway “to the moon” swing. ; He is likeable. ; Cheerful. ; Am I missing something, Ben?

A lot of names have been thrown around as potential trade bait. Names that we would never have expected to hear in those terms a couple of years ago: ; Lester, Ellsbury, Saltalamacchia, to name a few. ; A few fools even mentioned Pedroia. ; David Ortiz finally got his coveted 2-year contract. ; You know … the one he should have gotten two years ago before he damaged his Achilles. ; We have four catchers on the major league roster — four mediocre catchers for five mediocre starting pitchers. Great.

It’s only December, Ben. ; I realize you may have more work to do – something else up your sleeve. ; I’m just…well…a little worried. ; The national media is lining up the AL East on paper like this: ; Blue Jays, Rays, Yankees, Orioles and Red Sox. ; So, I guess nice guys finish last.

In just over two months, spring training will start. ; The 2013 Red Sox will assemble for group and individual photos. ; When you look into the faces in those photos, Ben, what will you think? ; Will you be proud that you put your personal stamp on this team? ; Will you think, “This is MY team”? ; Or will you curse your old friend, Theo Epstein, for leaving you with no way around these spare parts – this dusty back room in a used-furniture store. ; You are in this mess because your buddy, Theo, traded away the organization’s best prospects for the likes of Adrian Gonzalez. ; He left you to deal with the wreckage when the dominoes fell. ; ; Perhaps it is Theo who should stand front and center in the 2013 Red Sox team photo — like Jack Torrance in the 1921 photo of the Overlook Hotel in The Shining. ; Say “cheese”, Theo. ; Or, more appropriately, say “REDRUM”.

Maybe it’s not your fault, Ben. ; Maybe it is just the hand you have been dealt. ; Not even you — not even John Farrell — can work miracles.

Happy New Year, Ben. ; Now get some sleep. ; You are going to need it.

I'm a quilter and a fan of the Boston Red Sox. There's no relation between the two ... Just two things that I love! Follow me on Pinterest and Twitter @QuiltedBaseball
View all posts by Colleen →
This entry was posted in Baseball, Boston Red Sox, Uncategorized and tagged Baseball, Ben Cherington, Boston Red Sox. Bookmark the permalink.